skip to main | skip to sidebar

(I've unfortunately had to take a pause writing about my Christmas break culinary adventures due to my involvement in a musical production that just finished this past weekend.  So, now we return to our regularly scheduled programming....)

Knowing that she would still be on holidays from work, before my holidays my sister suggested doing a dishcrawl throughout central Toronto.  For those not familiar with what a dishcrawl is, you may have heard of a pub crawl, where people hop from one drinking establishment to another to try a feature/unique drink from each establishment.  So, a dishcrawl is where people hop from one eatery to another to try a feature/unique food dish from each establishment.  Though she had a quite a few places to choose, we originally settled to try five places and eventually only tried four as, in spite of what our tastebuds would tell us, our stomachs could only take so much.

Bannock
Our first stop was an Oliver & Bonacini restaurant, Bannock.  Featuring Canadian cuisine, it was the newest in the O&B franchise, and it didn't disappoint.  We ordered the Roast Duck Poutine Bannock Pizza.  Yes, bannock was used as the base for the pizza, and shredded pieces of roast duck was mixed amongst the fries, cheese curds and gravy.  Unlike some poutines I've had in the past, this version wasn't too salty, and it was a pretty novel experience to eat some poutine served on essentially flatbread.  We only ate half the pizza together to ensure we had enough room in our stomachs to try other places.
Banh Mi Boys
Our next stop was a unique and recently opened sandwich shop, Banh Mi Boys, located on Queen St. W. just west of Spadina Ave.  We almost skipped this place, but thanks to another foodie event my sister attended the previous night, she remembered to add this to our go-to list.  Banh mi is a Vietnamese style sandwich with colonial French influence.  My sister and I decided to try the Five Spice Pork Belly Banh Mi, topped with pickled carrots, cucumber and cilantro.  This was a delightful sandwich with the flavourful pork belly and lightly toasted fragrant baguette.  Apparently the owners of Banh Mi Boys have family connections to a Vietnamese baker in the Toronto area, allowing for shipments of fresh baguettes that have a pleasantly unique flavour and texture compared to the French baguettes.  If you're looking for something different from your usual lunch sandwich, then a stop here for a banh mi is certainly called for.
Wvrst
Our third stop was actually a beer and sausage hall, Wvrst.  We didn't partake on any of the beers, but we opted to share a sausage, and this place (pronounced "verst" according to its own website) makes its own sausages for all to enjoy.  My sister did suggest the bratwurst (German) and kranjska (Slovenian) as she'd enjoyed them during a previous visit.  I was, however, in the mood for something less traditional, so we agreed upon the bison, blueberry and maple sausage.  Topped with sauerkraut and sauteed sweet peppers, the sausage was pretty tasty.  The level of sweetness was just right, and I thought the flavouring reminded me, curiously, of Chinese preserved pork and liver sausage, though at a considerably milder level.
The County General
Our fourth and last stop was the furthest one on our journey, but I certainly didn't mind the long walk from Wvrst to help digest the three earlier dishes.  The County General, opened just a few months ago, is a small restaurant in the Trinity-Bellwoods neighbourhood featuring creative Canadian cuisine in a pleasantly informal atmosphere.  Some of the dishes were arguably influenced by rural homestyle cooking, while other dishes had some multicultural influences.
My sister mentioned the fried chicken thigh sandwich a few times, so we absolutely had to give it a try.  What a delight this little sandwich was!  Stuffed between two halves of a milk bun, the buttermilk fried chicken thigh was tender but not greasy, and the avocado chutney and cilantro added a unique, near-tropical dimension to the clearly North American base of the fried chicken.  I also couldn't get enough of the salad thanks to the dressing, which my sister and I suspected to be buttermilk-based. 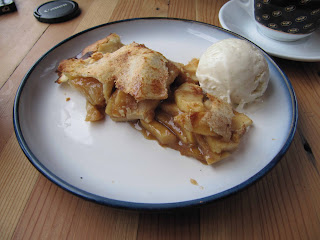 Fortunately the sandwich was small enough for us, for we were ready to call it a day and wanted to end on a sweet note.  Apple pie was available that day at the County General, so we ordered one a la mode.  I believed they used the right apples for the pie, for they were firm and mildly sweet, and the filling wasn't runny.  If I had to be absolutely nitpicky about the dessert, it would be that the slice of pie didn't hold itself up for presentation purposes.  Of course, our tastebuds and stomachs didn't cared about that at all.

All in all, it was a fantastically delicious journey that day, and I thought my sister's choices of places to eat were well-placed.  I definitely wouldn't mind doing another dishcrawl if time allows the next time I'm in Toronto with my sister.  Better yet, I hope to be able to do a dishcrawl on my future vacations wherever I may go!
at 12:25 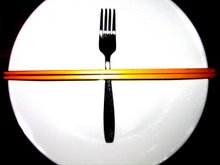 Most Read This Past Week

Most Read to Date